Jonathan M. Saenz, Esq., is the President of Texas Values, a nonprofit group dedicated to preserving and advancing a culture of family values in the state of Texas. Jonathan’s work on these issues spans two decades.

Prior to leading Texas Values (2012), Jonathan headed the First Liberty Institute offices at the Texas Capitol in Austin where he served as Director of Legislative Affairs and Attorney for First Liberty Institute (2007-2012). He frequently presents research,  analysis, and testimony before the Texas Legislature, State Board of Education, and other government entities on various issues affecting faith, family, and freedom.

Jonathan believes in religious liberty, sanctity of human life, family values, and constitutional rights and has been involved in numerous court cases, including cases before the Texas Supreme Court and the United State Supreme Court. Jonathan is the leading voice in Texas on marriage between one man and one woman and he was instrumental in the passage of Texas laws to protect religious liberty (“Under God” in the Texas pledge, the “One State Under God” license plate, the “Merry Christmas law”, the “Pastor Protection Law,” Freedom to Serve Children Act, and The First Amendment Defense Act/”Save Chick-fil-A” Law), pro-life laws such as the “Choose Life” license plate, the Sonogram law, HB 2 and many others. Jonathan served as a lawyer for Gianna Jessen, a courageous woman who survived a late-term abortion attempt when she was in the womb and is now a famous pro-life advocate.

Jonathan was also part of the winning legal team that successfully defended the religious freedom and free speech rights of nonprofit pregnancy care centers for women in Austin. Since 2005, Jonathan has worked to protect marriage between one man and one woman and policies that support this principle, and he has helped defeat threatening legislation on these matters in every legislative session since 2007. In 2015, Jonathan was the leading statewide voice in Texas that helped defeat the dangerous LGBT Houston “bathroom” ordinance, that would have allowed men into women’s bathrooms and would have restricted the religious freedom on businesses and nonprofit organizations. Jonathan also helped lead the State Board of Education victories to prevent censorship in the Science classroom and protect strong Social Studies & History teaching.

Jonathan hosts the weekly radio show “The Texas Values Report,” and has been featured in local, national, and international media such as Fox News, CNN, USA Radio, Austin-American Statesman, Dallas Morning News, and Houston Chronicle among many others, and is a sought-after speaker for important events. Mr. Saenz received his law degree from the University of Houston Law Center where he was the leader of the Pro-Life Cougars group that successfully defended its free speech rights in a landmark court case against the university. Jonathan received his undergraduate degree from the University of Texas at Austin, where he studied family policy issues. Jonathan is a 5th-generation Texan with strong family ties to Central and South Texas. He and his family live in Central Texas and are members of St. Vincent de Paul Catholic Church. 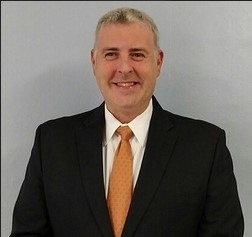 After graduating with a Bachelor’s in Economics from Guilford College in Greensboro, North Carolina, Jeremy began working as a stockbroker. He later became a licensed Investment Advisor helping clients manage over $12 million in assets. He then transitioned to a dual role as an investment and banking officer with a large national bank.

Seeing the importance of helping others, he was successfully accepted to medical school. While attending medical school, Jeremy quickly realized his true calling was working in the community helping others. For over five years, he worked with Joyce Meyer Ministries at the St. Louis Dream Center overseeing inner-city feeding programs designed to help the less fortunate.

Under his leadership, the feeding programs grew from 101,000 meals in 2010 to over 1 million meals in 2015, while reducing costs dramatically during the same period. His commitment to excellence and team development in high growth, rapid change environments led to local, regional and national recognition by individuals, organizations such as Feeding America, and by Under Secretary Kevin Concannon of the USDA.

Sensing a need to reach children and adults battling chronic extreme poverty, he helped create the 501(c)(3) public charity organization Nehemiah Fund, Inc. in early 2015. Working alongside his wife Robin and their three-year-old son Elijah, they created a program that is impacting the lives of at-risk children.

Having successfully met KPIs for ongoing program self-sufficiency, Jeremy relocated back to the USA to help a friend grow his real estate investment company. With his help, revenue increased dramatically through new business lines and a cohesive marketing strategy.

With operational processes in place, he returned to Mexico to launch a new business. The success of Baja First Alert was apparent to the nearly 10,000 expats who found peace of mind for their loved ones. When his wife became pregnant with their second child, Jeremy sold the business and returned to the USA for good.

He greatly enjoys spending time with his wife, son and daughter. Hobbies include percussion, hiking, family time and community outreach. Bryan English is the Director of the Church Ambassador Network for Texas Values, a nonprofit group dedicated to preserving and advancing faith, family, and freedom in the state of Texas. Bryan brings with him a background that includes pastoral ministry, non-profit work, government service, and political campaign experience.

While serving as the associate pastor of the First Baptist Church in Spencer, Iowa, Bryan became involved in the civic arena by building a coalition of pastors and helping to lead a campaign to defeat a pro-gambling referendum. God continued to open doors for ministry within the arena of public policy and politics over the years, and Bryan worked with candidates and elected officials at all levels of government, including several years as a Congressional Staffer.

In 2016, Bryan served as the Iowa State Director for the presidential campaign of US Senator Ted Cruz. Following the Senator’s 2016 Iowa Caucus win, Bryan came to Texas and led the faith outreach team for the national campaign. He also served as Senior Advisor on the Senator’s 2018 campaign for re-election.

In addition to his time in pastoral ministry and work in politics and public policy, Bryan has also has experience working with another state Family Policy Council. He previously served as the communications director for the Iowa Family Policy Center, which is now the Family Leader. 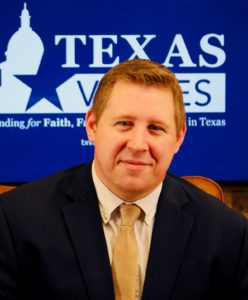 Jonathan Covey is the Director of Policy for Texas Values, a nonprofit group dedicated to fighting for faith, family, and freedom in the state of Texas. Before joining Texas Values, Jonathan worked for a member of the U.S. Congress and then spent over 5 years working in the Texas Capitol Building. He first served as Chief of Staff for a State Representative, and afterward as Senior Policy Analyst for a State Senator. In his Senate position, Jonathan helped manage the policy team and was lead staffer for the Senate State Affairs committee, staffing many public hearings during pro-life and pro-family legislative measures.

Jonathan graduated with a Bachelor’s in Business Management from Thomas Edison State University and obtained his first law degree from Oak Brook College of Law. During law school, he clerked part-time for the Orange County District Attorney’s Office. He is currently working on his second law degree from Mitchell Hamline School of Law, specializing in dispute resolution and mediation. He currently lives with his wife, Sarah, in the Cedar Park area. Mary Elizabeth has been published in the Daily Signal for her work on protecting children and is a contributor to the prolife publication Society of St. Sabastian where she has been awarded the honor of ‘Fellow.’ Mary Elizabeth has been invited to speak at venues across the state of Texas and the United States including the Texas GOP Convention and the national Pro-life Women’s Conference (PLWC).

Before joining the Texas Values team, Ms. Castle worked under the General Counsel at Midwestern State University, focusing on education policy. She also worked at First Liberty, where she conducted research and performed outreach for attorneys.

Mary Elizabeth holds a Bachelor of Arts Degree in Political Science from Southern Methodist University and received her Doctor of Jurisprudence degree from Texas Tech School of Law. She also serves on the Board of Directors of the Austin-based pro-life organization, Embrace Life Initiative. Alex Woodby is the Development Associate with Texas Values, a nonprofit group dedicated to fighting for faith, family, and freedom in the state of Texas. Before joining Texas Values, Alex worked for LegalZoom in their sales department. Prior to that, Alex worked in various other roles utilizing his skills in sales, marketing, and event coordinating. Alex graduated from Baylor University in 2016 with a Bachelor of Arts Degree in Corporate Communications. While attending Baylor University, Alex was very involved in church missions locally and abroad. He was also involved in a campus nonprofit group that benefited Mission Waco.

Currently Alex is actively involved with a church plant in the Hutto area. He has also been blessed with the opportunity to serve on the leadership team for a community-wide young adult ministry. Alex currently lives with his wife, Tiffany, in the Georgetown area. Georgina Jacques received her Bachelor’s Degree in Art from Texas State University in San Marcos, with a minor in Mass Communications. After a career in retail sales, Mrs. Jacques decided on a new career path after the birth of her daughter.

A devout Catholic, Georgina grew up doing mission work with her family. She has been involved in the prolife movement for a number of years, as a Pregnancy Resource Center (PRC) prayer volunteer and sidewalk advocate, and also through her parish in Kyle. In her spare time, Georgina enjoys creating art, and spending time with her husband and toddler daughter.