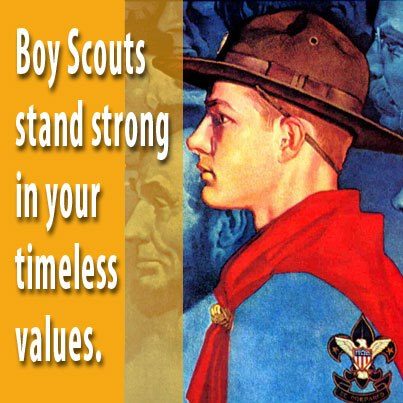 For years, The Boy Scouts of America (BSA), a private organization headquartered right here in Texas, have honorably stood strong against attacks from homosexual activists. In 2000, the BSA won an important U.S. Supreme Court case that upheld the First Amendment right of the private organization related to its belief that homosexual conduct is inconsistent with BSA’s values and its scout oath. But after decades of standing strong, the BSA has indicated it may change its constitutionally protected policy, saying it is “discussing potentially removing the national membership restriction regarding sexual orientation.”

The BSA has been instrumental in building the character of tens of millions of boys in our country, including countless boys right here in Texas, and developing them into men. The organization has led by example and stood on principal in resisting the constant bullying efforts of the homosexual activists looking to undercut the values and mission of the organization.

Retreating from their long-held and principled policies would be devastating to the organization and would undercut the values that have allowed the organization to successfully develop the character of so many boys. In addition, many Scout Groups meet at local churches.  How will this potential change impact churches and the ability of Scout Groups to meet? And despite the attacks on the Boy Scouts from homosexual activists and the media, recent surveys have shown that only 42 percent of Americans support changing the policy to allow homosexual scout leaders.

The BSA Board plans to meet next week and could decide as early as Monday. It is critically important that they hear from those that share our values and stand with them regarding their current policy on homosexuality. Please call the Boy Scouts of America at their national office in Irving at 972-580-2330 and tell them you support the organization standing firm on their moral values and that they should not change their policy on homosexuality.