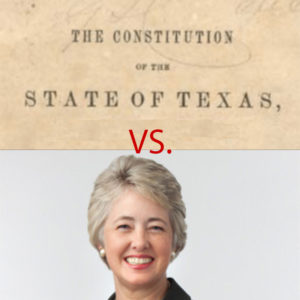 December 18, 2013 – Late yesterday, a state district court judge in Houston granted a temporary injunction and ordered Houston Mayor Annise Parker and the City of Houston to “cease and desist” from providing benefits to same-sex couples married in other states. The state court lawsuit was filed by a team of lawyers led by Jared Woodfill, chairman of the Harris County Republican Party. Jonathan Saenz, president and attorney for Texas Values, is also a part of the legal team that is challenging the unconstitutional acts by Mayor Parker. Earlier this year, Mayor Parker, who is an open lesbian, directed city staff to violate the Texas Constitution by giving legal status and recognition to same-sex marriage in Texas and offering benefits to “spouses” of employees who “legally” obtained a same-sex marriage in another state. The lawsuit alleges that Mayor Parker and the City of Houston have violated the law by “providing a benefit resulting from a marriage between persons of the same-sex recognized in a state other than Texas.”

“This is an important victory for the Texas Constitution, the rule of law and government accountability,” said Jonathan Saenz, president and attorney of Texas Values. “Mayor Parker is not above the law and this court ruling should be a strong reminder statewide that if any other elected official or government employee attempts to violate the Texas Constitution and state law on marriage, there will be consequences. The local leadership of Jared Woodfill is to be commended,” concluded Saenz.

A hearing on this lawsuit is scheduled for January 6, 2014 in Houston.

In addition to clear Texas law, Houston’s own city charter passed by the citizens in 2001 prohibits the city from offering benefits to same-sex couples. Although the Texas Supreme Court is currently reviewing the issue of recognition of same-sex divorce, it is widely believed that the all Republican nine member Court will certainly do nothing to disturb the clear language of our constitution and protect our state sovereignty.